The continuously deformable nature of soft robots makes controlling them a hard problem. Their ability to accomplish motions such as buckling, contraction, extension or bending, results in soft robots having virtually infinite degrees of freedom. We investigate several approaches for planning and control of foam hand motions.

Telemanipulation: Learning on the Robot

Given only the robot itself and a sensor glove (e.g. CyberGlove), our goal is to find a mapping between gestures of a user wearing the glove, and the desired robot hand pose. Specifically, we use linear regression to obtain a mapping between sensor values of the glove and tendon activation for the hand.

We use a sampling technique where we first configure the robot hand in a pose, and then mimic the pose with our own hand, wearing the sensor glove. Even with a small training set (120 recordings), the learned model was able to reproduce a variety of poses with high accuracy based on qualitative evaluation. The following figure shows a comparison between poses supplied by an operator and the poses realized by the foam hand. Both poses taken from the training set and new poses, which were not included in the training set are shown.

While we demonstrate dexterous manipulations using our teleoperation approach, the amount of test data that can be collected is limited, and similarity in poses is only qualitative and depends on the patience, care, and point of view of the user. If we can learn a mapping from poses to tendon actuations in simulation, the comparison between test poses and learned poses can be much more exact, and we can explore how additional data may improve the results. Learn more about foam hand modeling and simulation.

We are currently exploring the SOFA framework to simulate foam hand deformations resulting from tendon actuation. 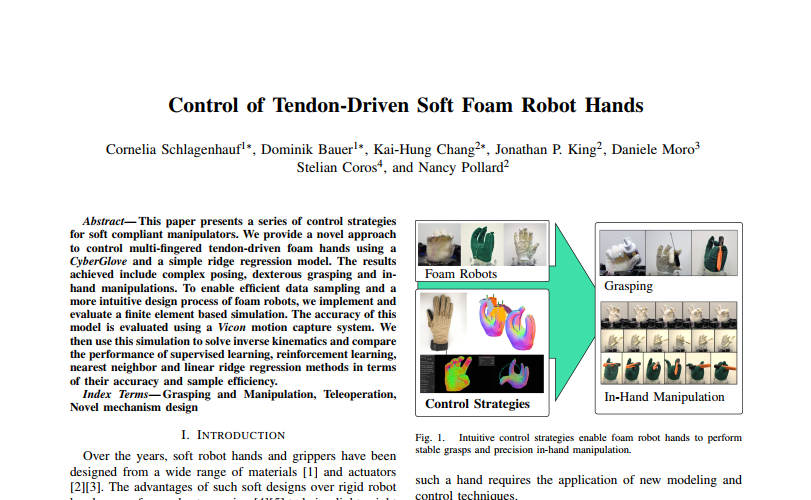